Salford's Friendly Anglers and their Community

May 14, 2013
Last year key people from SUBSTANCE social research co-operative: http://www.substance.coop/ and the Get Hooked On Fishing project: http://www.ghof.org.uk/ and myself put a LOT of work into an extensive funding bid to the Big Lottery Fund. The idea behind it was to generate interest, interaction and greater care of urban river corridors in the communities living close to them.

This expands upon the excellent achievements of GHOF that uses coarse fishing activities to train up "peer mentors" who then coach people their own age in angling skills and achieve accreditation that helps them into careers in angling. They have been able to report significant successes in reduction of antisocial behaviour and many benefits to the life-choices made by participants in the scheme. Some of the most comprehensive evidence for these successes was gathered through the involvement of SUBSTANCE as part of their huge research project covering "The Social and Community Benefits of Angling".

Part of my input into the new bid was to propose the use of fly fishing as an engagement tool - since it has the added dimension of requiring anglers to acknowledge and understand the whole foodweb and habitat quality that their angling experience depends on. This is an added bonus that isn't automatically realised - or particularly obvious - when using bait fishing methods. The more I looked into this aspect, the more I realised how suitable the "pared down" traditional Japanese form of fly fishing called "tenkara" would be in this respect. Much easier to pick up initially - and also featuring fly patterns that even beginners could tie within a few minutes with instruction.

I was also able to provide contacts with local branches of the "Trout in the Town" project who were already adopting and caring for their sections of urban river. The SUBSTANCE personnel drafted a questionnaire that could be taken out by Trout in the Town branch members to their local community to get a handle on what kind of interactions old and young people had - as well as how they viewed their local river corridor and the main challenges that they faced in their lives.

The absolute star performers in terms of pounding the pavements and achieving responses from the public were the Salford Friendly Anglers/Action Irwell group - whose project on the River Irwell is Salford's affiliated branch of the Trout in the Town network. If you've ever seen those bods with the clipboards on the street trying to get market research done - you'll know what a thankless task it can be. So the fact that the Salford squad were able, in their "spare" time, to collect over 130 responses to quite an extensive questionnaire was absolutely astounding (big respect to Mike Duddy, Nick Carter and Tom Donnai for those great efforts).

This gave me something else to get my teeth into for the project bid - and the figures made revealing reading; throwing up a wealth of interesting findings. By way of a very brief sample of examples, after transcribing questionnaire responses, I have plotted up "word clouds" for both the 11-19 year old and the Over 19 year old adult responses when people were talking in their own words about the main challenges faced by their community. The bigger the letters, the more frequently they were mentioned by different people. 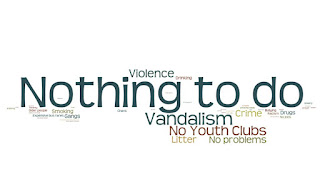 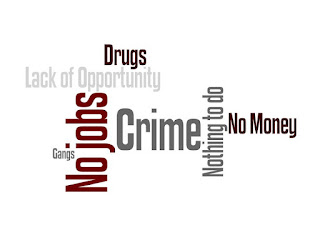 As another small slice of the findings from my questionnaire transcriptions was an excuse for me to dust off my statistics text books to look at how likely certain responses were to be due simply to pure chance. A chi-squared test of the proportion of responses observed versus what you would expect due to chance indicated that a previous encounter with the opportunity to try angling substantially increased a young person's interest in getting involved with angling in the future.

As it turned out, the statistical test gave an estimate of less than one in six thousand for the probability of the above results arising by pure chance. Consequently, by creating those opportunities for involvement with angling (and consequently their local river corridor) there is a good chance of passing on some significant benefits to those communities.

On the back of the many months of work done in designing and writing the bid - as well as diligently researching the need for the project and the precise nature of the benefits it would bring, it was extremely disappointing when our initial bid was not successful. We have had feedback that indicates what aspects the funding body would like to see changed - so I hope that, in future, all of the respective partner organisations can find the time and money to support a revised bid. However, these things are far from certain; given the large investment of resources required just to put a bid together - with absolutely no guarantee of getting anything back to cover future costs. It is really worth flagging up that for every completed project that any charity group or business can actually report on; there are many efforts that may or may not reap the rewards that they deserve. This, actually, makes those successes (when they do come off) all the more valuable and it should always be appreciated that what might seem, in retrospect, to have been an "inevitable" success - is always in doubt and always at risk right up until the final whistle. Any setback needs to galvanise future action   - and nothing of note would ever be achieved if people give up at the first sign of difficulty.

So - a huge thank you and well done to our questionnaire collectors and interviewers and we hope that we might bring some things to fruition in future. In the meantime, it is at least very useful to know that there are perceived needs for positive things for community members to do; and that projects of this nature can make meaningful changes to how different generations of people interact. The potential for those community improvements to also enhance the enjoyment and the care of the urban river corridor environment is also really important to recognise and, where possible, encourage.