Oban Trout in the Town and Argyll Fisheries Trust

June 27, 2012
It was my great pleasure to travel up to the west coast of Scotland on Sunday (24th June)to meet up with Alan Kettle-White and Daniel Brazier of Argyll Fisheries Trust . Staying over until Tuesday enabled me to get in a habitat survey of the Black Lynn Burn in Oban on the Monday as well as meeting local stakeholders such as businessman Graham MacQueen of MacQueen Brothers who are keen to have local community members discover, re-engage and value their local urban river. Hopping into the river to walk along the riverbed was the best way to get to know the burn.
It didn't take long to find signs of life: 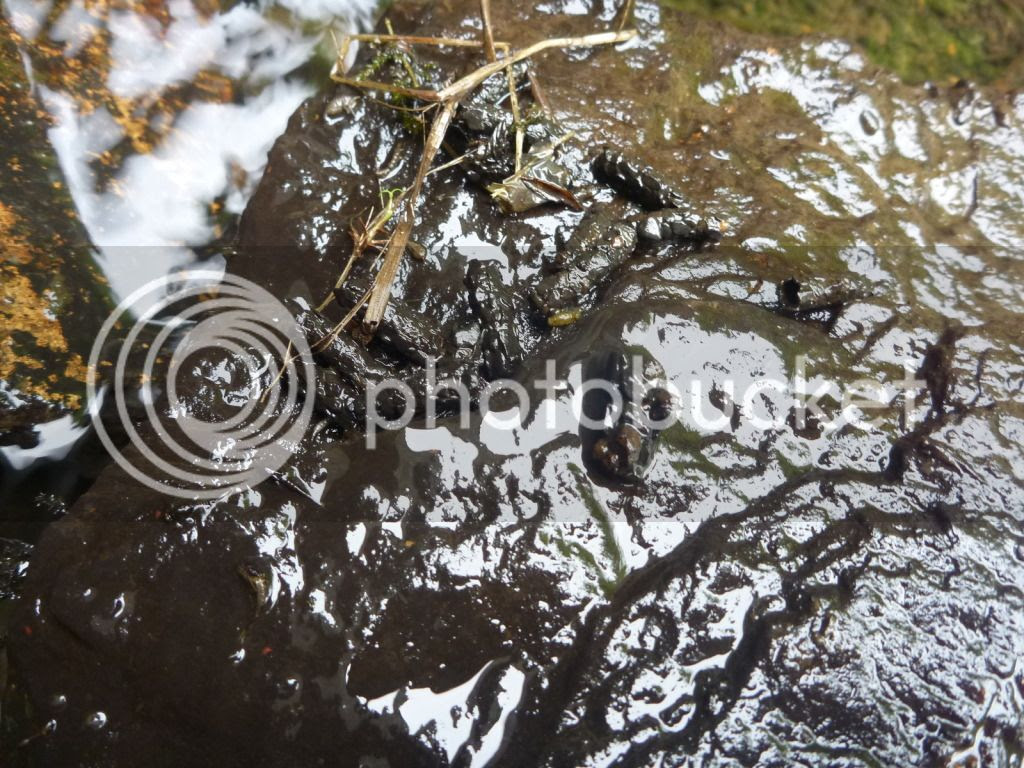 In fact, away from prying eyes, there was some very good habitat- particularly for juvenile trout (although also a lot of Himalayan balsam and Japanese knotweed also in evidence!) As long as this small structure does not conceal services (such as sewage/gas pipes or electrical cables) and appropriate permission can be gained, the variety in depth and flow upstream of this low weir can be improved. This would be a simple case of removing part of the structure. 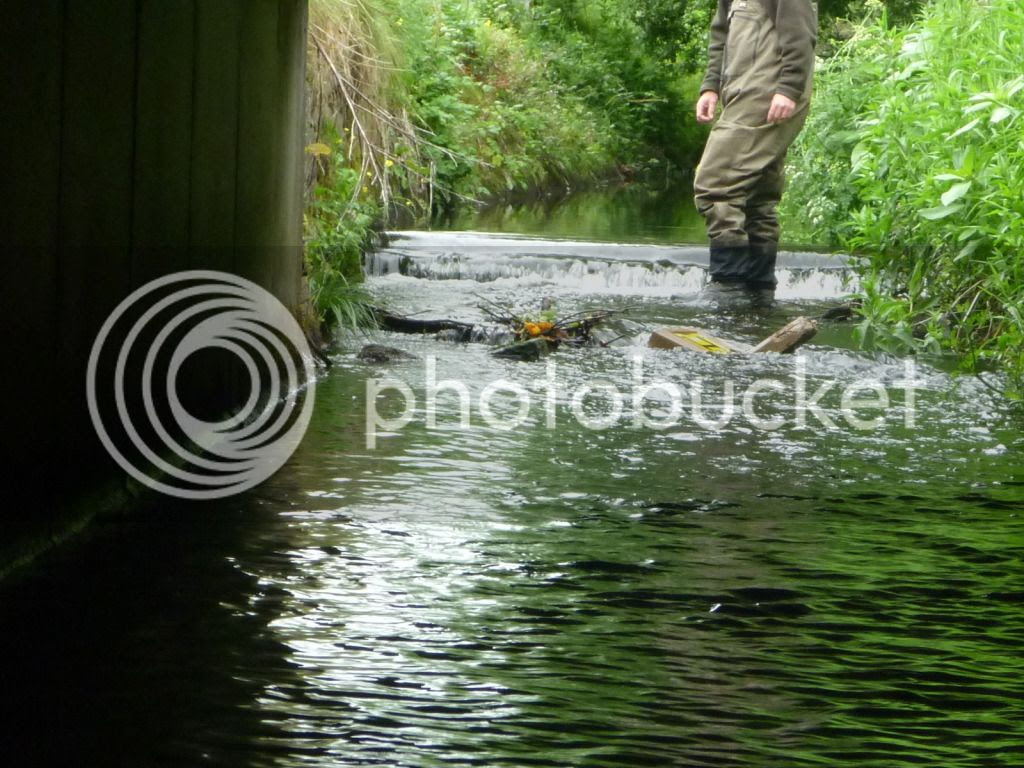 Other parts of the channel presented, perhaps, some "bigger opportunities for improvement" For example: 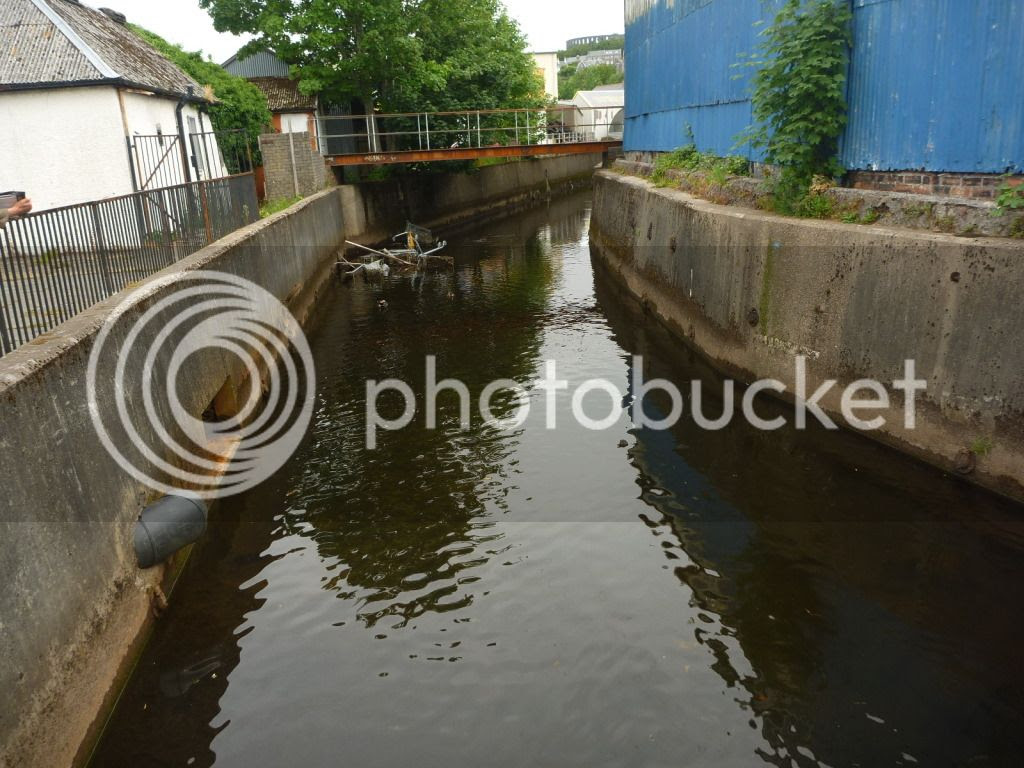 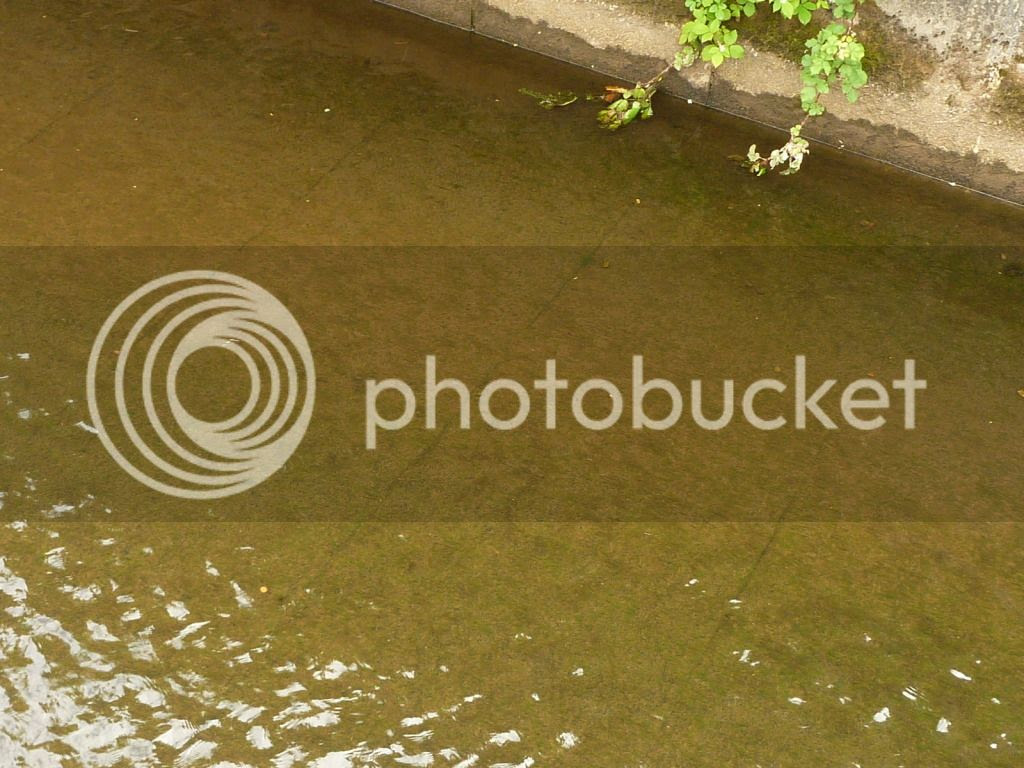 It will be great to sit down and design some habitat works to give a helping hand to the mixed assembly of a few small finnock and stream-dwelling brownies (one of which made a brief appearance for the Oban Times photographer - courtesy of the pre-rigged Tenkara rod!) that we saw during the visit.

I was also lucky enough to get the guided tour of a small part of Loch Awe from Senior Fisheries Biologist Alan Kettle-White (and superb Ferox/all round angler). Alan lives on the shore of the Loch has accounted for a LOT of the Loch Awe Ferox captures on rod and line - ALL returned alive of course. Going out on his boat allowed Alan to show me a whole host of amazing things on the echo sounder screen. First of all, the "false bottom" of plankton hanging in a dense layer many meters below the surface (although well off the bottom over 200ft down!). His knowledge of the surrounding hills, their effect on the wind and the knock-on effect on the distribution of microscopic food (and hence everything that feeds on the level below them in the food chain) equates to the content of dozens of masterclasses. It is this kind of knowledge (as well as a huge amount of skill with tuning lures so that they perform just right) that allows him to be such a consistent catcher of the mysterious and rare Ferox. A couple of his fish (weighing around a mere 25lb and over 30lb respectively!!!!) are pictured below: 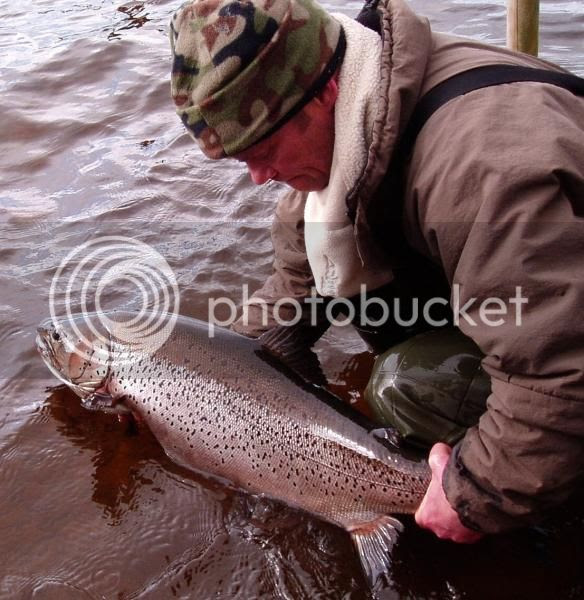 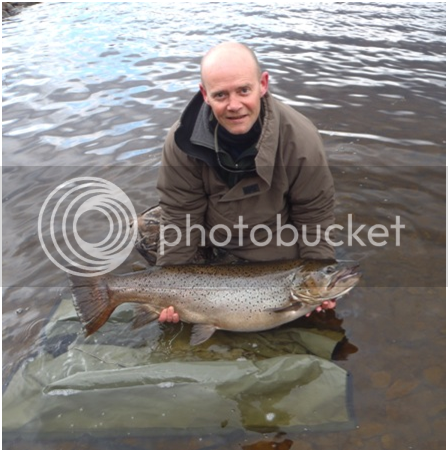 The biology and behaviour of these prehistoric leviathans is a fascinating story that we are just beginning to get some handle on - thanks to people like Alan. Genetics work (for example by Andrew Ferguson and Alistair Duguid) clearly demonstrates that the Ferox is a totally separate beast from the generally much shorter-lived standard wild brown trout that they share a home with. For instance, particular gene - Ldh5 (100)- that carries the code for a specific version of an enzyme (Lactose dehydrogenase)is very much more common in Ferox trout. In addition, the DNA in the "mitochondria" of their cells (inherited solely down the maternal line: ) shows an entirely separate ancestry between the two kinds of trout. For the first part of their lives, Ferox have a similar (or slightly slower) growth rate compared to the other trout. BUT - as their bodies (and crucially their mouths) get large enough, they start specialising on prey of steadily larger and larger sizes. Now - we all know that all brown trout will prey on fish whenever they get the chance. The big difference here is that, as soon as they get big enough, Ferox really go to town on the top predator role. This causes a huge "gear change" upwards in their growth rate.

Just as an example of how different this is from the run of the mill "chomping fish when the chance arises" behaviour. Alan caught a Ferox of 8lb in 2008 and was able to fit a small plastic ID tag to it. The fish was recaptured in 2012 weighing an incredible 28lb. These are fish that might take 4 years to get larger than about a pound in weight....but once their mouths are big enough to swallow char, other trout and (since their introduction) various coarse fish species....Its worth taking a second to think about that; 20lb weight increase in four years.

Out of interest, we saw some very large shadows hanging in the water column on the fish finder - but none were willing to take one of Alan's trolled lures on the Tuesday morning that we spent on the boat.

There was also proof positive that Ferox were patrolling around. Thanks to the recently initiated radio transmitter tagging programme, Alan can now track a number of previously captured fish from suitably high vantage points above the loch. Although we couldn't get a signal from the two fish that had been logged recently in the area close to Alan's house (having both been originally caught and tagged in a part of the loch over 20 miles away!!!) - we did pick up a signal from one tagged fish on our drive along the 26-mile Loch towards the nearest train station on my way home.

On the video below you can hear the electronic "blips" that are being picked up from a 25lb Ferox somewhere in the basin just in front of the lay-by where we could stop the van. Hopefully towards the end of this year, if the tags can be retained in the fish, we might start to find out conclusively where some of these fish go to spawn (and whether this is in just one area - or perhaps several and previously unknown areas).

Many thanks to Alan for hosting me and for everyone else that came to the various meetings and site visits. Now all I need to do is get writing that Advisory Visit report and making plans for habitat works on the Black Lynn.

Unknown said…
Paul, Wow wow those Ferox, simply wonderful. So nice to see them going back too?

I fished in Scotland some years ago at an old fishing lodge were dinner was served at 8pm!!. I fished in the dark on the loch with a small fry pattern and hooked a very big fish, but sadly never saw it. It's power was far too much for my simple fly rod. I'm sure it was a Ferox trout!!

Will follow you now. Call in a see me if you get time?

Paul Gaskell said…
Wow, it would have been amazing to see a Ferox landed on standard fly gear!