October 24, 2011
As regular readers will know, there is a long-running collaboration between the Wild Trout Trust (most recently via the Trout in the Town project) and the Wandle Trust. This September I had the honour of doing some further consultancy on how best to carry out parts of their ongoing in-stream habitat restoration project.

The programme of in-channel works on the Carshalton arm was initiated as part of the WTT Practical visit in February 2011 and is also part of the overall strategy for this section of the river. The strategy was driven by the findings of numerous site visits technical guidance documents that the WTT prepared for the Wandle Trust for use in negotiations with the local Environment Agency representatives. Through this process the E.A. and the Wandle Trust were able to lower/remove a number of weirs as well as to fit a fish pass to a weir that could not be removed. The fish pass and its installation were generously paid for and carried out by the Environment Agency. The strategy documents and the attendant detailed technical guidance notes allowed, following a very long negotiation process of around 24 months, the quality of the habitat between the sites of the previous barriers to be enhanced. It is the unenviable job of Bella Davies (Wandle Trust director) to understand and address all of the priority issues affecting the Wandle at the catchment scale. Consequently, Bella has translated the WTT technical advise into actions on the ground by securing funding and using her extensive conservation biology expertise to organise the works for the whole of the Wandle.
Practical Visit works revisited
The first order of business during the September consultation was to assess how well the previously installed structures are performing. My guide for this was Tim Longstaff who has been responsible for driving forward the amazing programme of works that the Wandle Trust have completed since February. 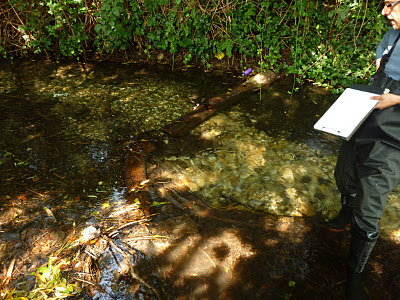 Tim Longstaff and I assess how this upstream V has scoured clean gravels next to accumulated sediment and coarse woody/leaf material. Good varied habitat for a range of species. This area was previously uniformly dominated with sand and silt 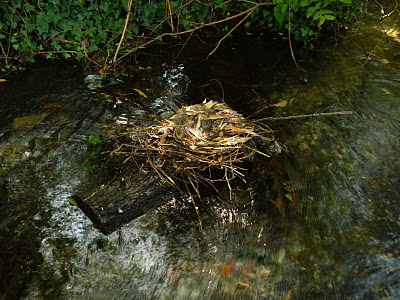 Although water levels are cripplingly low following a record dry summer, the cover logs would still act to provide overhead refuge for fish. The birds also quite like them!
Consulting on the next in-channel works
The next step was to complement the bold and brilliant channel narrowing, planting, extensive gravel introduction and weir lowering recently carried out by the Wandle Trust. My aim here was to advise on how best to locate and orientate flow deflecting log structures in order to preserve a varied "hump and hollow" streambed in the introduced gravels. Following a day's walkover of the full reach (which is now a fully connected length of 1-km of river; a stark contrast to the previous series of 100 to 300m sections that were penned in between the series of weirs), myself and Tim agreed on a plan for log placements to be installed during the working party the next day. 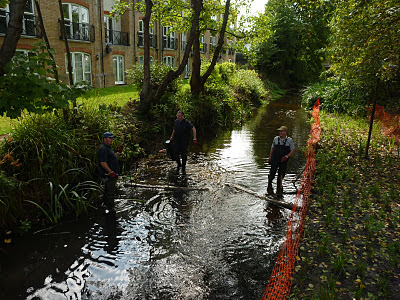 An example of logs placed by volunteers under direction from myself and Tim during the working party. Here, the newly narrowed channel and introduced gravels are being used to generate focused mid-channel flow that will preserve variety in depth and flow. The excellent planting scheme will also develop to provide good marginal cover for juvenile fish 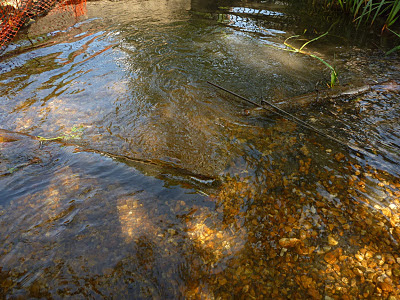 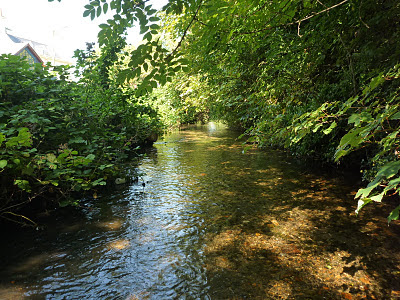 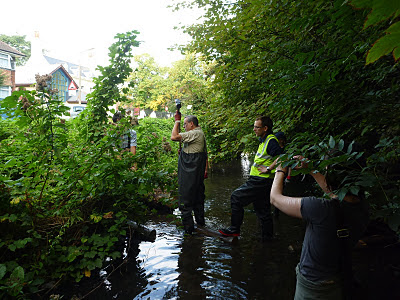 The Wandle Trust Volunteers swing into action to increase diversity of flow and depth on the working party
Further works have been (and will continue to be) carried out to increase the amount of "brashy" cover available for juvenile trout throughout this 1-km section of river. In addition, variety in the size of river bed substrate particles will be added by incorporating more cobble-sized to breeze block-sized material scattered amongst the gravels. We will also seek to create some additional deeper scour holes (with nearby overhead cover) to make adult trout feel at home. This then leads us on to the strategy for re-introducing genuinely wild juvenile trout (but more of this strategy in future posts....).
For now I just have to say massive thanks for all the great works undertaken by the Wandle Trust - and particular thanks for being receptive to the more radical thinking required to make progress in this heavily urbanised river. I look forward to the next steps towards thriving self-sustaining trout populations. 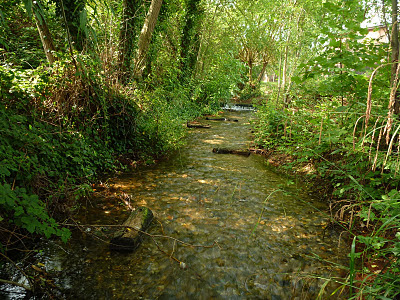