March 25, 2011
The last day of the grayling season saw another band of intrepids take to the river in order to catch up, fish and record the days findings to keep up the record of our river's stocks. 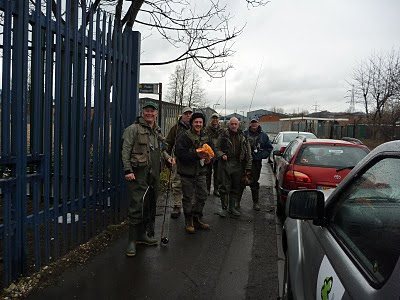 The TEAM head out A great day out and evidence that, at least in sections of the river, sufficient grayling have survived the attentions of a large influx of goosander to keep going over another cold winter. We are lucky that there are good areas of cover on the river as well as the steep gradient of the river maintaining a wide variety of current speeds and depths. 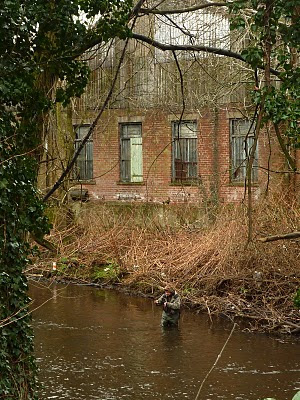 Dave "Cort nowt" W proving his forum nickname wrong again Goosander are beautiful birds, but freezing over of their normal feeding areas can put a great deal of pressure on dense winter shoals of river grayling. In rivers with a little less varied habitat, the impacts can be very severe and the presence of impassable weirs or other barriers reduce the chances of fish re-colonisation. Of course, the birds are able to fly between numerous different feeding grounds if food becomes depleted in one area. All of this highlights the need to maintain good habitat and connectivity (lack of barriers) on our rivers so that nature can maintain the balance between predator and prey without too much "boom and bust". Back to the matter in hand - Danny had "sampled" 21 fish for himself and even managed to catch one perfectly to order when I pointed the camera at him (video below). I had also heard reports that Dave W managed 37 fish and I look forward to the full breakdown of numbers.