March 16, 2010
A quick one to make up for the lack of posts recently (I have been furiously drafting the upcoming "Urban river restoration guidelines" manual for publication this summer......)

This one is about weirs (again - see "weirs tha bin?" previous blog post)

I've lost count of the number of times that angling club members have been scared to death by the suggestion that a weir is taken down - Understandably - because often the foot of that weir (and the attendant scour hole) forms a weir pool that has the best fishing on that section of river...

Thanks so, so much to Theo and the Wandle piscators/Wandle Trust for having the faith in our advice - it is by weir lowering or removal that the single good fishing spot BELOW a weir can be transformed into tens (hundreds?) of good fishing spots above the weir! All of that current velocity that is killed behind the structure (causing silt to gather) is re-invigorated throughout the whole reach. This will clear away the silt, expose spawning gravels (and habitat for more invertebrate species) and also provide the energy to produce localised scour pools all along the river which will hold fish all the way up the reach.

In at least one study of weir removal - TEN TIMES the BIOMASS of trout and salmon were found following weir removal (compared to the biomass when the weir was in place). This is a far, far, far bigger effect than installing a fish pass (which is sometimes your only option - but is never perfect because only a proportion of fish will find and navigate them, and it also has no beneficial effect on the habitat above the weir).

A huge well done also to Tanya Houston in E.A. fisheries for getting the permissions in place and also marshalling staff/volunteers to begin taking down these key barriers (course by course!).

Here are the effects of the removal of the first tier of stones from one of the Wandle weirs:

A smallish example - but one which makes free upstream movement for fish difficult (or impossible for some). It also has accumulated a lot of silt behind it. 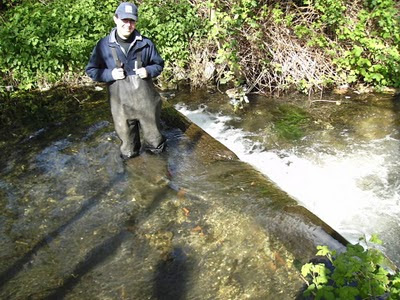 And here is the same weir with the top course of stone removed and a notch taken out at the near bank side. Note the large ramp of clean gravel below the weir - this now has water percolating upwards through it from the bottom of the scour hole beneath the structure - excellent spawning habitat 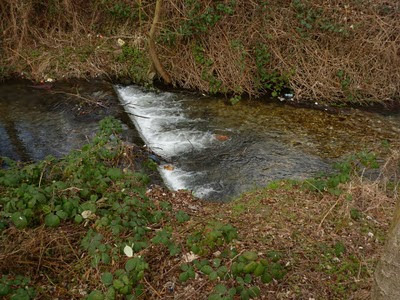 Contrast this with the situation just above the weir BEFORE the stones were removed - ankle to mid calf-deep in grey silty sediment (including road runoff): 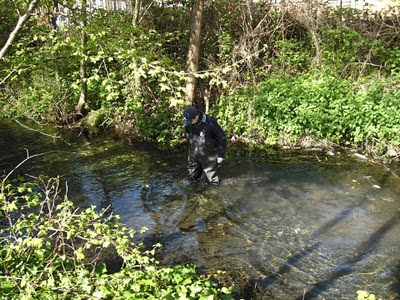 Now, with just the top course removed and notched, this section is bright clean gravel with a good current flow. Ripe for trout colonisation - especially with a little small-scale LWD introduction to encourage mid-channel scour and overhead cover (note the tree towards the centre of the frame - this is the same one that Theo is standing - in silt - in front of in the previous photo): 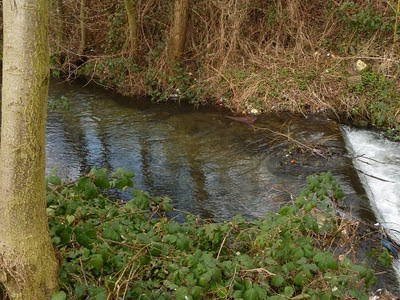 Flykuni said…
I love this project. I am coming to the UK for the Fringe in Edinburgh, then fishing through the UK for 10 days. I would love to donate time and assist in a project, clean up, structure work, anything. I am from Los Angeles, and my friends and I work to preserve and restore our trout waters. We do have them, and close to town. Thanks, and plese keep up the good fight.

I can be reached at