"Himeji masu" in the Town 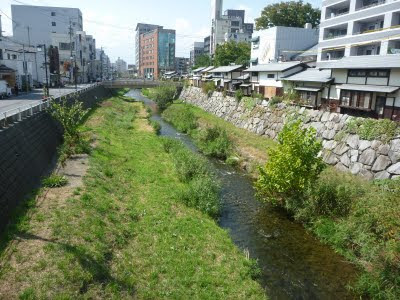 Recent travels to Japan (For a holiday-cum-martial arts competition!) revealed a wonderful example of how urban rivers can thrive and be valued by local residents. In Matsumoto, a medium-sized city in the Nagano prefecture, an engineered channel runs alongside the uptown streets and within it flows the stream known as the “Metoba gawa”. Whilst it is true that the river channel is, overall, constrained within these engineered limits to control flood risk– the authorities have retained the excellent natural substrate and allowed/encouraged natural processes of stream bed erosion, deposition and marginal vegetation development in the base of this channel. The bankside vegetation behind the marginal strip is kept to a low enough level to allow pedestrian access via regular strimming. Consequently, there is a reasonable balance between human access, mown low-level flowering plants and grassland vegetation (supporting many butterflies and other invertebrates) versus more “shaggy” vegetation that overhangs or emerges from the wetted margins and varied in-stream habitat arising from the good gradient and natural substrate. The water quality appeared to be excellent in this stream, whose source is in the mountains overlooking Matsumoto. The clear glides, riffles and pools were all visibly heaving with fish of many kinds. 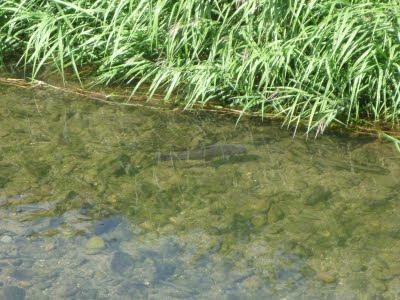 A carp accompanied by hundreds of dace-like fish and minnows
Pods of Carp, shoals of small dace-like fish and even trout could easily be spotted from the bridges and bank-side paths. Even more striking to me, in my professional capacity, were the utter lack of fly-tipping and the broad cross section of society who used the riverside to relax at lunchtimes, walk their dogs and generally pass the time of day.
An approach that mirrors advice commonly given to my UK Trout in the Town projects is the use of cheap, easily replaced interpretative signage. Treating such signs as “consumables” for UK projects (to be replaced when defaced, damaged or lost) allows important messages to be continually and cheaply advertised; and highlights the utility of cheap materials. Although a similar approach is used in Japan, it would seem that the “life-expectancy” of their signs would be generally much longer. 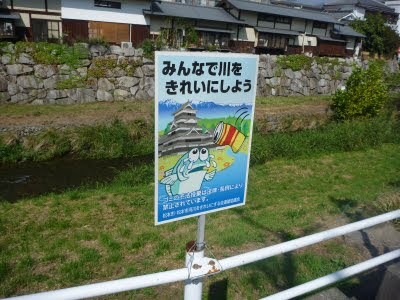 The lady owner of the guesthouse that I stayed (Maruma Ryokan, Matsumoto) very kindly explained to me that, being in a mountainous region and far from the sea, the local people actually ate freshwater fish. This is seen as very strange in most areas of Japan – where seafood comes from the Ocean! The local name, she told me, for the delicious (!!!) little trout that I was served for breakfast was “Himeji masu” which she translated for me as “Princess trout”. Alongside the sticky rice, pickles, miso soup, green tea and fantastic fresh fruit, it made for a deeply wonderful breakfast!
Later on in that day, I was able to reflect on how catering for urban green spaces and the wildlife within it allowed the Matsumoto residents to be so connected to their river. Like all good Japanese reflection, this was undertaken in a hot bath – in this case outdoors in scalding water from hot volcanic springs and surrounded by bamboo forests, dragonflies and sunshine. It is a hard life sometimes. 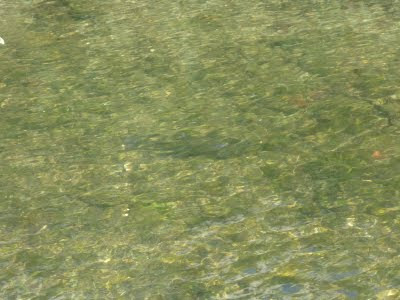 You sure that's a trout?

Paul Gaskell said…
Cheers Simon (you cheeky git; a video would have been better proof of trouty goodness. I may not be the brightest, but it was spotty and had an adipose fin!!)
20 October 2009 at 01:42

Val said…
so good to see the respect and intelligence the Japanese show to their watercourses.
The first insect I saw when I was over there was a mayfly!!
Good positive stuff. Thanks, Paul
20 October 2009 at 13:44