June 11, 2009
As many of you know already, the inspiration for the WTT to seek funding to set up the national Trout in the Town project came from Andy Pritchard's band of folk on the River Colne in East Lancashire. Watch and enjoy the video below, filmed and edited by Colne's Albert Wood. Check out guest appearances of "Sheffield Trout in the Town" luminaries Kath and John Blewitt. The brash that was being collected was destined for pulping following tree works at a plantation at Stocks Reservoir. Just a few simple phonecalls and emails (via Natural England) identified this source of "soft revetment" raw material. A couple more emails to let Andy P know of the opportunity and the next thing you know he's dashed off a risk assessment and arranged a fleet of flatbed tipper vans and trailers along with a band of volunteers to shift the lot 15 miles to Colne. Andy and all the rest of the folk are, I'm sure you'll agree, an inspiration for the amount of sheer hard work they are willing to organise and complete during their "free" time.

The resultant 8 tipper loads of brash will be used to slow down the rate of inappropriate erosion that is currently exposing service pipes and putting too much sediment into the river Colne just upstream of the main town (an example of similar work on the river Manifold can be seen in the photos at the bottom of the page). 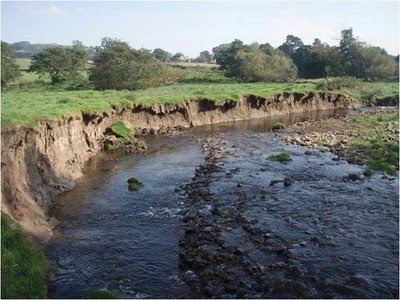 When banks are being lost at a rate of around one metre per storm event along miles of riverbank (like here on the river Manifold), terrestrial and aquatic flora and fauna are badly impacted 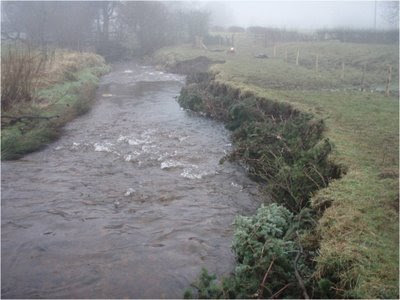 It is important to highlight that erosion is a vital ecological process - but can run out of control in grazed systems. In such instances, extensive regular bank loss leads to significant reductions in habitat quality for a wide range of aquatic and terrestrial species of flora and fauna. Attempts to stop erosion dead in its tracks using "Hard" revetments of blocks of stone or gabion baskets often create more problems than they solve (due to eddying currents arising from their relatively smooth, geometrically angular surfaces). Fast linear flow and whirling vortices that are both promoted by "hard" engineering result in flashier river flows and higher potential for destructive erosion. Brashings are an ideal alternative due to their very high surface area to volume ratio (hydrologically, they are much "rougher" than hard engineering). This has the effect of "stilling" or damping out fast flowing water currents next to the bank, accumulating sediment, regrading the vertical bank faces to a more shallow incline and (in combination with managed livestock access) allowing marginal vegetation to grow up and consolidate the new bank. The branches also provide habitat in their own right for a range of invertebrate and vertebrate species (including juvenile trout and kingfishers as notable, linked, examples).

I've read down your whole blog to here, so far, and this article taught me something new.

I've already copy and paste - forwarded the ones above about Weir removal and the diagram for stream improvement with an upstream V etc to my father who is restoring his own section of a spawning stream near Christchurch, in South Island, New Zealand.

It's great to see how professional, and further developed urban and small stream restoration is in the UK. As here in NZ we are lagging far behind.

I think that some of my fellow 'Community based stream restoration' fans and practitioners should attend some talks and training with your organisation!