Appraisal of trial LWD work on the Goyt

April 26, 2009
Project overview
Disley and New Mills Angling Club (DNMAC) secured Environment Agency (EA) funding for habitat work to preserve and encourage wild trout populations on their sections of the River Goyt. The funding was provided following an initial Advisory Visit (AV) from the Wild Trout Trust (WTT) and lead to a Practical Visit (PV) in partnership with the local EA Operations Delivery team.
Violent spate flows in the River Goyt mean that many common river restoration practices cannot be adopted (as work would quickly be destroyed). Therefore, an innovative programme of channel enhancement through robust Large Woody Debris (LWD) management was drawn up. Invertebrate community monitoring was also proposed so that DNMAC could protect their river from pollution events and investigate potential biological effects of channel management.

Phased approach to LWD installation
Although desirable from a fisheries and biodiversity perspective, the EA must balance potential benefits of LWD against the risk of anchor failure/bridge blockage associated with 26 tree kicker/flow deflector installations. Therefore, an initial trial was agreed using two groups of tree kickers (4 trees at Strines, 5 at Hague Bar). More extensive future works (involving further tree kickers and flow deflectors) could only be considered if the anchoring techniques were proven in the test scenario. 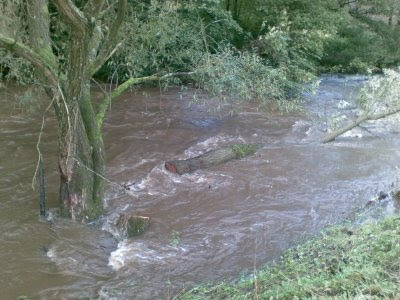 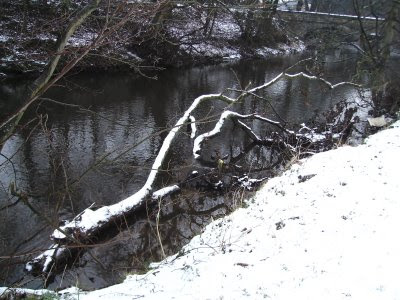 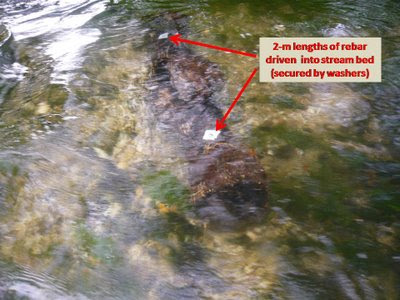 Figure 2: Example of LWD installed to produce localised scour (adult/juvenile habitat) and sorted gravel (spawning habitat). Short logs (1 to 3 m) are ideal and pose negligible threat of blockage to downstream structures (in the unlikely event of anchor failure)
Profile of Phase 1 work results
Direct effects
The percentage of each goal that has been attained as a direct result of Phase 1 trials is summarised graphically (Fig. 3). The agreed restriction on the number of LWD installations during such trials means that about one third of the proposed tree kicker installation goal has been achieved (N.B. the final number of tree kickers will be determined by ecological needs and available resources, rather than an arbitrary 26 based on initial assessments of candidate sites). It is noted that two tree kickers have settled in positions that mean they only function during very high flows (Fig. 3; highlighted column and Fig. 4). Whilst these will still give some erosion protection during spate flows; the resultant cover during low flows will be below their maximum potential. It is, however, important to acknowledge that all tree kickers are providing crucial shelter during spate flows that will help to prevent the washout of juvenile fish. Young grayling are particularly susceptible to washout by storm flows – and often whole year 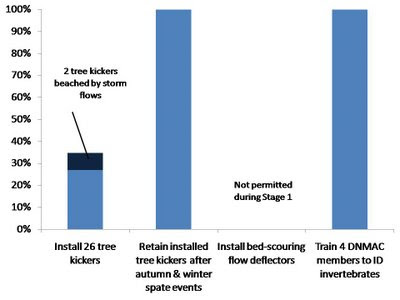 Figure 3: Progress towards Phase 1 (trial work) goals. Works completed by September 2008 and assessed April 2009.
classes can be lost during summer spates. The accumulation of fine sediment by tree kickers (Fig. 5) shows their great capacity to calm the torrential spate flows; helping to prevent large scale losses of juvenile fish. Moreover, the 100% success rate of safely retaining tree kickers at their anchor points is encouraging – and is good evidence that the cabling technique is effective. It is particularly important to note that very substantial amounts of naturally occurring debris washed up against the bridge parapets at Strines (including a huge mature tree), whilst the installed LWD held firm over the same period.
The current trial will help “fine tune” the positioning of future tree kickers to improve the chances that they will perform optimally at all water heights. In particular, it is noted that tree kicker installation will function at the greatest variety of water heights where trees are anchored into areas of deep water. Such areas are best identified under summer low flow conditions. The re-assessment and appropriate repositioning of trees following a season of spate flows is a desirable part of LWD management. In certain cases, it may be appropriate to add rebar pins to trees that have been anchored by cables (to achieve specific positioning within the channel).
Each of the above modifications to future practice has been identified by assessing the direct results of the Phase 1 habitat works. As well as the physical habitat works, the successful training of four core invertebrate monitors is noted (Fig 3) and is intended to lead to further peer group training and a continual monitoring programme. 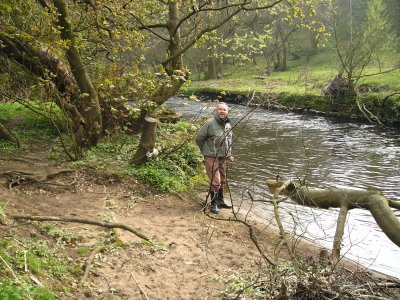 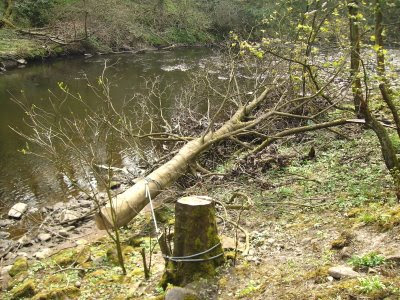 Figure 4: Although performing useful roles at high flows – the post-spate positions of these two tree kickers mean they are performing a more limited function during low flow conditions 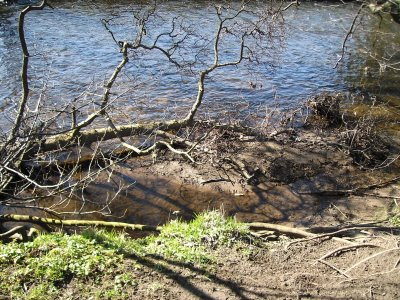 Figure 5: Clear demonstration of the “stilling” effect of tree kickers during spate flows. The sediment carried by the spate flows has been dropped out of suspension where the flow has been calmed by the branches. These calmed areas are havens for juvenile fish during spates

Future Consequences
Although the invertebrate monitoring programme is still in very early stages, it is hoped that future changes to habitat (and fluctuations in water quality) will be flagged up as a result of this work. Similarly, producing and monitoring fishery catch returns could be considered (and would provide valuable additional interpretations of the biological consequences of habitat modification).
In all cases, “ before” and “after” photographs will be invaluable. Photography could be coupled with simple depth measurements over the cross section of the channel where flow deflectors are to be installed (again pre and post works). Together, these could indicate the consequences for current flow and bed morphology resulting from flow deflector installation.
It is hoped that all of these “consequential benefits” will be assessed and can be plotted following the next phase of habitat works. Although each measurement is very simple to carry out, important conclusions can be drawn from the results. Not only will concrete benefits of the work be clearly identified, but also the need for future improvements and modifications to habitat works will become absolutely obvious.