Metamorphosis in the Classroom 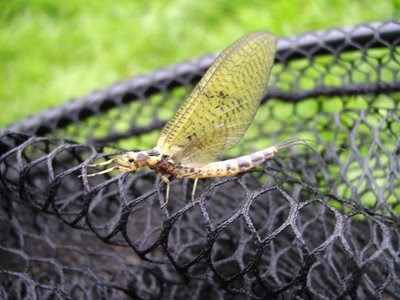 A concept that Trout in the Town wants to work on, produce printed educational material for and take into schools is "Mayfly in Classrooms". Through this, students would learn about and witness the lifecycle of iconic invertebrates as well as experiencing real-life hatches on their very own local "outdoor classrooms". Crucially, the accompanying educational material would include accounts of how each and every facet of the aquatic AND riparian (terrestrial) habitats are interdependent.
Aquatic invertebrates lend themselves to education about aquatic conservation very readily. Their biology perfectly illustrates requirements for good aquatic habitat. They also play a pivotal role in linking aquatic and terrestrial biodiversity. These less well known aspects of their biology would (for most people) include the crucial subsidies that aquatic invertebrates make to terrestrial predators once they metamorphose and take to the air. In this way, calorific energy that has arisen in the aquatic habitat is transferred into the diet of terrestrial predators like birds, bats and spiders. An important aspect of this process is the way that the sun's energy is captured and fed into the food chains beneath the water surface in a direct pathway (i.e. in the case of mayfly nymphs grazing on algae that flourish on the sunlit stream bed). However, it is equally important to know that the terrestrial habitat also gives subsidies of energy back to the stream food chains too. There is a massive (but indirect) supply of the sun's energy from terrestrial habitats into aquatic food chains. Tree leaves (that have trapped energy by photosynthesis during summer) fall into the river in autumn. So called "shredder" invertebrates feed on this "leaf litter" and are, in turn, eaten by predators. Aquatic predators are also subsidised more directly by bankside vegetation when invertebrates drop from leaves to make unplanned crash-landings in the stream.
Everything is linked.
To conserve the aquatic, you must equally look after the riparian (and vice versa). A good lesson for everyone, whether you are in a classroom or not?